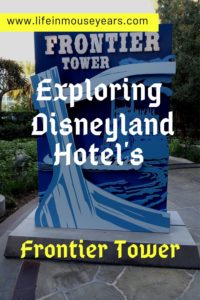 If you would like to read more about the hotel, check out my post Exploring Disneyland Hotel’s Fantasy Tower here.

Looking for some luggage for your trip? Check out this three-piece set from Target.

First on the list of exploring Disneyland Hotel’s Frontier Tower is the wall decorations. Once you enter this tower and hear the themed music, you can then see the theme of this tower. It reminds me of Frontierland in Disneyland.

On the walls, there are framed art prints of Frontierland. Some of them are the concept art from when Disneyland was being imagined.

This sketch design is of Fort Wilderness that was on Tom Sawyer’s Island. It is still there, although, it is used as a “backstage” area now. But back in the day, you were able to go inside and up into the towers of the fort.

Next, this sketch shows Walt Disney’s idea for Frontier Country which became Frontierland.

Another difference is the room numbers. While the numbers have the same look in each tower, the plate behind it has it’s own design. For example, check out the photo below for the Frontier Tower. It has the Mark Twain Riverboat and the dock on it.

Little details are everywhere at the Disneyland Resort!

Next on the list for exploring Disneyland Hotel’s Frontier Tower is the Big Thunder Mountain Railroad Miniature. This ¼ inch scale model is a replica of the original model when they were designing the ride back in the ‘70s.

I have ridden this attraction so many times! However, looking at the model, I am amazed at where the train goes. I don’t realize it when I ride it.

If you have a chance, I recommend checking out the model and follow the tracks. It is pretty neat to go around the entire model.

Another thing to check out when you are exploring Disneyland Hotel’s Frontier Tower is Old Un-Faithful. Out in front of the tower, looking at the entrance, on your left is a water feature. A little pond-like area with a little waterfall. Every so often, water shoots up in the air just like old faithful! It is a nice touch. And also a nice nod to the past of the attraction that used to be in Frontierland before Big Thunder Mountain Railroad. It was called Mine Train Through Nature’s Wonderland.

Another fun thing to check out is the floral Frontier Mickey Mouse out front of the Frontier Tower. During our visit in 2011, we stayed in the Frontier Tower and had a view of this spot from our room. We got to see the process of them making this floral Mickey Mouse during our stay. It is interesting. Before they plant all the plants and flowers, there is a frame that goes down. Then the Cast Members fill in the areas with the specific plants to make it look like Mickey Mouse with a coonskin cap on his head! This is truly a work of art in plant form! 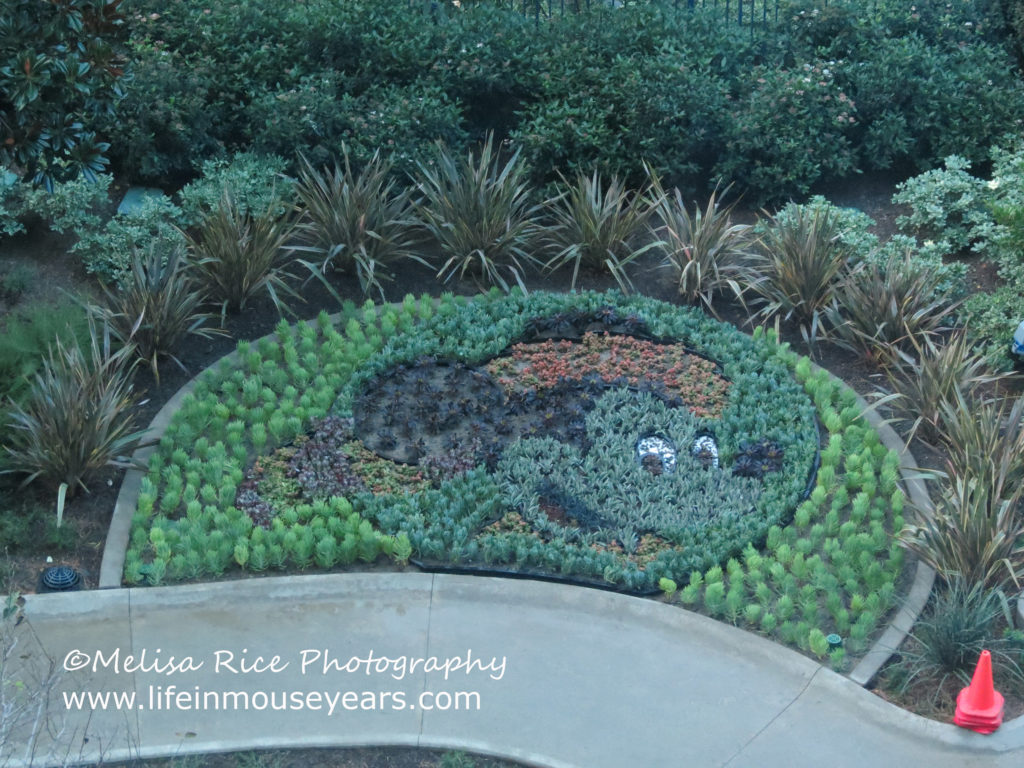 This is not the only spot in the Disneyland Resort where Mickey is made out of flowers. If you would like to learn more about all the different flower areas in the park, check out my post-Discover the Many Flowers of  Disneyland here.

Ok, so for this next section, it is not really designed to be Frontier Tower specific. However, I have only really noticed this hidden Mickey at the lobby seating in Frontier Tower. I haven’t come across this in the other towers. But, I thought I would mention it.

In the Lobby of the Frontier Tower, these three rounds of seating stools are always in the shape of Mickey. Therefore, making it a hidden Mickey of sorts. It is a fun little thing to spot as you walk by.

For more information on Hidden Mickey’s around the Disneyland Resort, check out this post.

Next on exploring Disneyland Hotel’s Frontier Tower, is the restroom in the lobby. This is not my first mention of Disneyland bathrooms… (Check out my Secrets of Disneyland Bathrooms here.)

Disneyland is known for its theming of lands, attractions and more all over the Disneyland Resort. As a result, the bathrooms tend to be themed as well! The ones that are in the lobby of the Frontier tower has wallpaper that is of the poster art from Disneyland. It is all Frontierland ones.

If you are not familiar with Disneyland’s poster art, check out this post here.

Finally, if you celebrate the holidays, in the lobby of Disneyland Hotel’s Frontier Tower is a tree that is decorated with items to fit with the theme of Frontierland in Disneyland.

The lanterns are so cute! I really like the look of old fashioned lanterns.

If you have any questions or comments on today’s post-Exploring Disneyland Hotel’s Frontier Tower, please feel free to leave them below. I would love to help you out!

More Posts on the Disneyland Hotel 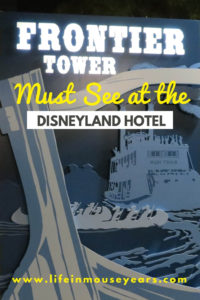 I just came across a couple of items on Amazon that I didn’t know existed. I have done some posts on what to take with you to the Disneyland parks, but I didn’t know that there are kits on Amazon for this! There is an essentials pack that has snacks, maps, and other essentials. The maps are for Disney World, however, this is still a great pack to get essentials all in one place!

Another great pack I found is a Mickey or Minnie Gift Pack. It has a book for pressed pennies, ear headbands, autograph book, stickers and more! This is a great gift to give to your little one while you are there at the park, and at a cheaper price than buying it all there. There is a pack for Mickey and a pack for Minnie Mouse.

About Melisa Rice 139 Articles
Melisa has had a love for Disneyland that started at a very young age. Her family traveled to Disneyland every year or two when she was growing up. As she got older, she began to read anything she could get her hands on regarding Disneyland. If you ask her anything about Disneyland, she is always willing to share her knowledge. As a former Manager of a video store, she has a wealth of knowledge about movies as well. In addition to these experiences, she also loves to take landscape photography, do crafting, bake cakes for her nieces and nephews. But most of all, she enjoys reading the Bible.