There have been so many changes to Disneyland since the park opened in 1955. Therefore, I thought that it would be interesting and fun to share what attractions were at Disneyland in 1955 and which attractions no longer exist in today’s post 5 Extinct Disneyland Opening Day Attractions.

A couple of years ago  I did a post called 10 Opening Day Attractions that Still Exist in Disneyland. It was a fun one and I don’t know why I didn’t think to do the ones that are no longer at the park sooner. Since Disneyland has been closed and I have been feeling blah about writing about the park, this idea perked me right up! I love Disneyland history and this is a great way to share the history! 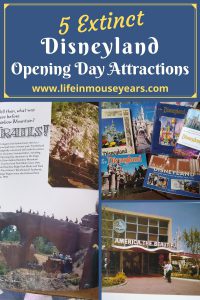 I also like to share photos. But I only use my photos so I don’t get into any copyright snafus. I do have some Disneyland annual books, (my mom does too), so I will see what info I can find and take some photos of the books to share with you all!

First, you can find the post I did on the 12 Opening Day Attractions that Still Exist Today in Disneyland here. Down below is a quick listing of each attraction that is still in Disneyland today. The post that is linked above gives some history on Disneyland as well as a description of each attraction. If you are interested, just click the link, and it will open in another window for you to check it out. (I LOVE to read about Disneyland. I’m assuming since you are here that you do too!)

Likewise, I linked each attraction below where I have written a post designated to that attraction. Lots of Disneyland information coming your way!

Next on the list of 5 Extinct Disneyland Opening Day Attractions are the rides that have since been removed. Check out the list below.

What Were These Attractions?

Next on the list of Extinct Disneyland Opening Day Attractions is to explain what each attraction was. 1955 was a long time ago and a lot of people may not know what these attractions were. I wasn’t around for them personally (except for the 360 Theatre that had America the Beautiful and American Journeys because they were still going in the late 70s and 80s). Although, I do love Disneyland’s history and I enjoy researching and sharing my findings with all of you! Let’s see what I found.

Check out all that Disney has to offer now at shop Disney! First of all on the list of Extinct Disneyland Opening Day Attractions is the Horse Drawn Surrey’s. This attraction was at Disneyland on opening day, July 17th, 1955, and it was on Main Street, U.S.A. until 1971. A Surrey is a four-wheeled (no door) carriage that is pulled by a horse. If you ever watched Little House on the Prairie, it is like the buggy that Dr. Baker drove in the T.V. series.

I was not able to find any photos of this attraction in any of the Disneyland books we own. Bummer.

Second, on the list of Extinct Disneyland Opening Day Attractions is the Space Station X-1 in Tomorrowland. This attraction was where you could see a Satellite view of America. It was in the same building that housed the Circarama aka Circle-Vision 360. Today it is the building that Buzz Lightyears Astro Blasters is in. Man how things have changed.

Third, on the list of Extinct Disneyland Opening Day Attractions is the Circarama aka Circle-Vision 360 in Tomorrowland.

This attraction was a circular room that showed movies on nine screens. In 1967, Tomorrowland was remodeled and the Circle-Vision auditorium was expanded to be bigger and better than before. It then showed America the Beautiful.

The auditorium was filled with railings that you would stand in-between. Like you were in line. This was to give people something to hold onto because some of the images made you feel like you were actually moving! Being that there were all these screens surrounding you, you could see what was in front of you, behind you, and off to both sides. As if you were literally standing at that spot in America in person. It was so cool! (Yes, I am old enough to remember this one.)

The next change came in 1984. They replaced America the Beautiful with a film called American Journeys. Same concept, just an updated film. Unfortunately, sometime between 1995 and 1998, Circle-Vision 360 was closed forever. This is one attraction I really miss!

Fourth on the list of Extinct Disneyland Opening Day Attractions is the Stage Coach ride. This attraction was located in Frontierland. The stagecoach started in the area where the Big Thunder Mountain Railroad is now and it went along the Rivers of America. In 1956 some new scenes were added and then it was called Rainbow Ridge Stage Coach Rides.

Can you imagine riding around in a stagecoach to get where you are needing to go? It would have been nice to see what it was like to ride one, however, it is not the way I would want to travel now! Knotts Berry Farm still has its Stagecoach attraction. Although it is not so country over there anymore with all the rollercoasters, it is still nice to have the option to ride a stagecoach!

If you would like to see more photos of this attraction, one site I like to read is Yesterland. Find their post about Rainbow Ridge Stage Coach Rides here.

Finally on the list of Extinct Disneyland Opening Day Attractions is the Mule Pack. Can you imagine getting the chance to ride a mule? Being that this attraction was also in Frontierland it went along the same area as the stagecoach. Seeing all the sites along the Rivers of America.

This attraction also had numerous name changes over the years. In 1956, when Disneyland saw its first big expansion, Rainbow Ridge was brought into Frontierland. This meant new things to see while riding the mules. Therefore, because of the additions, the Mule Pack attraction was renamed Rainbow Ridge Pack Mules. This name lasted until 1960 when it received its final name change. It became Pack Mules Through Nature’s Wonderland. This was due to the fact that a new train ride was built in Frontierland. Again in the area where Big Thunder Mountain Railroad is today, there was Mine Train Through Nature’s Wonderland.

Check out some photos and more at Yesterland for the Mule Pack ride here.

Disneyland has seen a lot of changes through the years. Some lands had more changes than others, some attractions we miss and wish they could be brought back, however, others, you can see some of the reasons why they were changed. Even though these attractions are gone today, we can still learn, see and read about these once-beloved attractions online or in books.

I hope that you enjoyed today’s post 5 Extinct Disneyland Opening Day Attractions. If you have any questions or comments on today’s post, please feel free to leave them below in the comment section. I would love to help!

Find some beautiful gifts for Mom for Mother’s Day!