Exploring Mr. Toad’s Wild Ride in Disneyland is a fun and wild experience! This attraction has been around since opening day in 1955! Making it one of the original attractions that is still in the park today! Although it has changed over the years, it is still one popular ride you will want to check out!

Mr. Toad’s Wild Ride is not my most favorite attraction at Disneyland, (when you pick between Pirates of the Caribbean, Haunted Mansion, Peter Pan’s Flight…), however, it is one of the many attractions that I make it a point to ride each time I visit the Disneyland Resort. 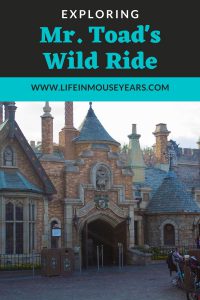 What is Mr. Toad’s Wild Ride?

Mr. Toad’s Wild Ride is a dark ride just like Peter Pan’s Flight, Snow White’s Scary Adventures, and Pinocchio’s Daring Journey. What this means is that the ride is inside a building,  in the dark, and uses show lighting and black lights to light up the scenes.

One thing about this ride is that it is pretty fast and has a lot of turns going back and forth. Mr. Toad’s Wild Ride is based on the 1949 cartoon Adventures of Ichabod and Mr. Toad. Mostly, from the first film in that set, Wind in the Willows. As a result of Mr. Toad’s reckless driving of a horse and carriage, his friends try to get him to stop driving around because he could continue to cause property damage. Alas, Mr. Toad sees a new motorcar and cannot help himself…

Next on the list of Exploring Mr. Toad’s Wild Ride in Disneyland is the ride vehicles. For this attraction, it is a 1900’s style buggy. It seats two people per car with one steering wheel. Be prepared if you let your little one drive! (Don’t worry Mom and Dad, the car goes along a track.)

There are names on the front of each vehicle. It is one of the characters from the movie that the ride is based on. For example, there is Mr. Toad, MacBadger, Cyril, Toady, Weasel, Winky, Ratty, or Moley.

Fun Fact: There are 16 cars for this attraction.

Another thing to check out while Exploring Mr. Toad’s Wild Ride in Disneyland is the statue of Mr. Toad. While in line for this attraction, and once inside of the building, there is a statue of Mr. Toad. Right behind him is a stained glass window. If you are quick enough, you just might be able to take a photo with him. It makes for a great souvenir.

Next for Exploring Mr. Toad’s Wild Ride in Disneyland is the original ride design. This attraction is one of the opening day attractions that is still in Disneyland today! Since 1955, guests have been taking a trip in one of these motorcars through London and Toad Hall.

When Mr. Toad’s Wild Ride first opened, there were canvas canopies hanging all around. It was similar to a carnival or a medieval faire.

In addition to the sets being made from plywood, there was not much to be found inside. In comparison to the other Fantasyland rides when Disneyland first opened, Mr. Toad’s Wild Ride had the least. As a result, this attraction was only 98 seconds long! Making it the shortest attraction in Fantasyland as well!

It surprises me that this attraction has lasted all this time. But there is just something about it that draws people to it.

Looking for a gift for someone? Find some lovely options in the link below!

Another set of changes to check out while Exploring Mr. Toad’s Wild Ride in Disneyland is the ones that happened in 1961. Mr. Toad’s received set enhancements and new characters. This included more policemen and new crash doors. As well as the fully sculpted little devil’s in the ending scene.

Next on Exploring Mr. Toad’s Wild Ride in Disneyland are the changes that came in 1983. First, the exterior of the attraction was changed to resemble a stone and brick building with part of the line being indoors. Next, more scenes were added to the attraction. For example, a library from Toad Hall, a bartender spinning drinks, scared sheep with a farmer, a section down by the docks by the river being chased by the police, and a courtroom where you are deemed guilty by the judge. There are still a lot of flat plywood characters and props, however, not all of it is plywood like in the beginning.

Anyone Can Ride, But…

Finally on the list of Exploring Mr. Toad’s Wild Ride in Disneyland is that anyone can ride this attraction! But, if you have small ones in tow, you may not want to ride this attraction first off. It can be scary. With all the turning and speed. Then add in all the loud sounds, it can frighten them. I had a friend that started her three-year-old on this attraction. It was hard to convince her to try the other rides after that. Not to say that all littles will be scared, I just would recommend starting with the other Fantasyland dark rides first, then give Mr. Toad’s a whirl.

Find great deals on theme park tickets, hotels, and car rentals in the link below! One of the opening day attractions that still exist today in Disneyland, Mr. Toad’s Wild Ride is still a very popular attraction! With all there is to see and speed recklessly through, you may need a few more ride throughs to catch all of what is in this attraction!

Do you have any questions or comments on today’s post-Exploring Mr. Toad’s Wild Ride in Disneyland? Please feel free to leave them below in the comments. I would love to help!

Find the current up to date information about Disneyland at its official website here.

Check out some of these other posts on the attractions in Disneyland.

It’s September! Do you have a loved one who’s birthstone is a Sapphire? Check out the beautiful options at Gabriel and Co!