Fun Facts About the Haunted Mansion is something I would like to share with you! The Haunted Mansion is a classic attraction that is still majorly popular today. Being that there are 999 happy haunts inside, there are a lot of stories and fun facts that go into making the ghosts and guests of Disneyland happy.

Fun Facts About The Haunted Mansion

The Haunted Mansion is one of my favorite attractions at Disneyland. (It is hard to pick one, Pirates of the Caribbean is high on my list of favs too.) There is so much history and stories that surround Disneyland. The Haunted Mansion is one that has a history. I don’t know that everyone is as into knowing everything about this attraction, but, I will try to share some of the fun facts I have learned over the years. 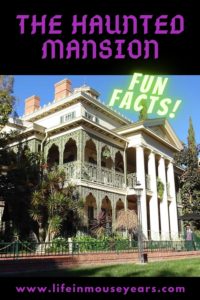 What is The Haunted Mansion?

First on the list of Fun Facts About The Haunted Mansion is what is it? This attraction at Disneyland is called a dark ride. That means you are inside of a building, in the dark with just show lighting, sounds, and things to look at.

For example, in The Haunted Mansion, you see ghosts in various scenes, a grandfather clock with a greenish spotlight andaand ballroom that is down below you with ghosts at a table celebrating a birthday.

The Haunted Mansion is an attraction that has 999 ghosts. (There is always room for one more!) The first room you enter is a foyer where you meet your “ghost host”. The next room is the stretching room. Here you see paintings all around. Everyone looks their best in the paintings. Next, as the room “stretches”, you see the full picture and things are not always what they seem. After that, you go down a hallway with changing pictures. At the end of the hall is where you board your “Doom Buggy”. (More on the Doom Buggies below.) Then you continue your tour of the mansion with your ghost host as your guide and see all the ghostly inhabitants.

Next on the list of Fun Facts About The Haunted Mansion is the Doom Buggies. Doom Buggies are the ride vehicles in this attraction. Disney uses a ride system called the Omnimover. It was originally used on an attraction called Adventures through Inner Space. When the Imagineers were trying to figure out how to make The Haunted Mansion a high capacity ride, they decided to use the same ride system as the Adventures through Inner Space.

It is a ride track that continuously moves. (Thus making it a high capacity.) There is a moving floor next to it when you get on and off of the ride vehicle. It is like an escalator but flat.

However, The Haunted Mansion vehicles are black. Once you are inside the safety bar closes by itself, making sure you are safe.

Another thing on the list of Fun Facts About the Haunted Mansion is the features to help Guests with Disabilities. You can ride it too! After my mom broke her ankle, we went to Disneyland. Riding in a scooter was not fun for her. However, we learned things during that trip that we would not have known before.

One thing is that there are two different shapes to the “Doom Buggies”. They are pretty much the same and you wouldn’t necessarily notice the difference. I never had, until a Cast Member pointed it out to us while we had to wait forever to get on the attraction. The seating area is more open. The back part of where you sit is cut away making it easier for you to sit then slide in. Once he explained that to us, it made sense why we had to wait for so long when no one was in line.

Another thing Disney does for anyone with a disability is that they stop the moving floor and the ride vehicles so that you can get on at your leisure. Some people need more time to get in. This helps immensely!

If you are traveling with older family members that need a little more time and not necessarily the disability option, when you get to the Cast Member guiding you to the Doom Buggy, just ask them to slow down the platform. This will give you extra time to climb on board. This helped my Mom a lot. (Also, I was glad because it gave me more time too!)

An Idea Before Disneyland

Then in the early 60s, it was worked on again. Although, with the 64-65 New York World’s Fair coming, Disney was asked to work on multiple projects. (It’s a Small World being one of them.) Walt Disney pulled the Imagineers Rolly Crump and Yale Gracey off of The Haunted Mansion to work on the fair projects. Once the fair was over, Rolly Crump and Yale Gracey were back at it again.

Check out what fun Disney Merch you can find in the link below! The Haunted Mansion Was Built Before the Ride

Fifth on the list of Fun Facts About The Haunted Mansion is that the Mansion was built before the ride. The beautiful old plantation-style house was built in 1963. Then it sat there empty for years! Another Imagineer, Marty Skylar, was asked to make a sign that was an advertisement.

Here is what was said, exactly how Disney had it back then:

“Notice! All Ghosts And Restless Spirits Post-lifetime leases are now available in this HAUNTED MANSION Don’t be left out in the sunshine! Enjoy active retirement in this country club atmosphere-the fashionable address for famous ghosts, ghosts trying to make a name for themselves… and ghosts afraid to live by themselves! Leases include License to scare the daylights out of guests visiting the Portrait Gallery, Museum of the Supernatural, graveyard, and other happy haunting grounds. for reservations send resume of past experience to: Ghost Relations Dept. Disneyland Please! Do not apply in person.”

The Haunted Mansion would be delayed again after Walt Disney passed away in 1966. Nevertheless, this attraction did continue to move forward and it opened to guests on August 9, 1969.

One thing on the list of Fun Facts About the Haunted Mansion that I think is so funny is one that Rolly Crump shared. He and Yale Gracey worked in a room in the animation building. They had so many ghosts, sets, tricks, and things they built and tested for the mansion. One day they got a call from the personnel department asking them to leave the lights on when they leave because the janitors didn’t want to go in there in the dark. They said ok and left them on. Yet, they rigged the room with an infrared beam so when it was set off the whole room would be backlit and the ghosts were set off.

“When we came in the next morning, all the effects were running and there was a broom lying in the center of the floor. Personnel called and said, ‘You’ll have to clean up your own room because the janitors won’t go in there anymore.’”

What Ghostly Trick is Used in the Attraction?

Another on the list of Fun Facts About The Haunted Mansion is that they use a deceptive lighting trick called “Pepper’s Ghost” in the attraction.

Warning: If you want to remain in the dark on how it works in the attraction, you will want to skip to the next section.

Pepper’s Ghost works by having two rooms. One you can see and one you can’t. In the invisible room, there are items, figures in that room that will be lit up. Between the two rooms, there is a glass at an angle that will reflect the images into the room you can see.

Next on the list of Fun Facts About The Haunted Mansion is the real-life Knight in shining armor. Back in the early 80s, I was at Disneyland with my parents. We went on The Haunted Mansion. I was in the middle of both my parents. I was only 5 I think. When we went through the hallway with the doors and something is knocking on them, there was a knight suit standing there. As our Doom Buggy went by, the Knight reached out and touched my hand that was on the safety bar. I screamed and screamed for a very long time. Needless to say, I have never forgotten that and it didn’t last very long as a feature in the attraction.

Finally on the list of Fun Facts About The Haunted Mansion is the Nightmare Before Christmas Holiday Overlay. It is based on the Tim Burton animated movie Nightmare Before Christmas. Each year, the entire ride, inside and out, gets rethemed from October to January. The first year it started was 2001. Personally, I am partial to the original Haunted Mansion, nonetheless, I have to admit that it is very impressive what all they do and add to the attraction for the Holidays. This includes the gingerbread house that is different each year!

If you would like to know more about The Haunted Mansion Holiday, you can find it here.

The Haunted Mansion is an amazing classic attraction at the Disneyland Resort! There are so many fun facts to learn about this attraction. In fact, there are even more things to learn than what I have in this post. Possibly more to come soon! Hurry Back…

If you have any questions or comments on today’s post-Fun Facts About the Haunted Mansion, please feel free to leave them below. I would love to help! About Melisa Rice 177 Articles
Melisa has had a love for Disneyland that started at a very young age. Her family traveled to Disneyland every year or two when she was growing up. As she got older, she began to read anything she could get her hands on regarding Disneyland. If you ask her anything about Disneyland, she is always willing to share her knowledge. As a former Manager of a video store, she has a wealth of knowledge about movies as well. In addition to these experiences, she also loves to take landscape photography, do crafting, bake cakes for her nieces and nephews. But most of all, she enjoys reading the Bible.