One of my favorite Fantasyland attractions is Peter Pan’s Flight. (First is It’s a Small World.) It is so fun to soar above London at night surrounded by stars! 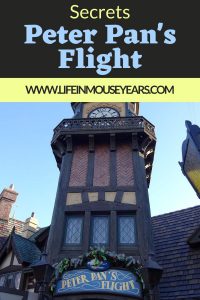 If you would like to know more about what opening day attractions are still in Disneyland today, check out my post 12 Opening Day Attractions that Still Exist Today.

What is Peter Pan’s Flight?

With this attraction, you board a miniature galleon (a multi-deck ship with sails) and fly in the air through London and more to see the story of Peter Pan.

Next on the list of Secrets of Peter Pan’s Flight in Disneyland is the ride track system. Similar to the other dark rides in Fantasyland, the ride vehicle goes along a track. With the other rides in Fantasyland, the track is laid out on the ground, for Peter Pan’s Flight, the track is up above. This way it helps the ship to move and gives it the “flying” feeling. It too can go left, right, or straight, however, it can also go up, down, and tip forward just a little to feel like you are soaring.

A fun fact, to compare Disney World’s version of the attraction with Disneyland’s, Disney World’s Peter Pan’s Flight has a higher ride capacity because the ships continuously move as you board from a moving platform. Just like when you ride The Haunted Mansion.

Next on Secrets of Peter Pan’s Flight in Disneyland is that the original entrance design was different compared to the way it looks today. Back in 1955 when Disneyland opened, Fantasyland was a Medieval Faire theme. Colorful banners and ride fronts. Check out the concept design below.

When Peter Pan’s Flight in Disneyland first opened, the ride did not have any Peter Pan figures. Just like when Snow White first opened, guests that rode Peter Pan wondered where the main character was? They were confused and didn’t realize that Disney was trying to make the ride to be as if you were the character going through the story. As a result, when Fantasyland was closed and rethemed in 1982, they added the characters to the rides.

Next on the Secrets of Peter Pan’s Flight in Disneyland are the changes that happened in the ’80s. In the section above, I mentioned that Disney added the characters to the Fantasyland Attractions. That is one of the changes that was made. In addition to the characters being added, Disney also changed the look to Fantasyland. The building themes were changed from Medieval Fair to a rustic European village.

Additions from Another Fantasyland Location

Another item on the list of Secrets of Peter Pan’s Flight in Disneyland is that there were some items taken from one attraction and used inside of Peter Pan.

In Fantasyland, where Dumbo the Flying Elephant is located today, there was a pirate ship restaurant that was surrounded by water and there was also skull rock. Skull rock was a waterfall with tables and chairs around where people could sit and eat.

I do wish this was still in Disneyland. It sounds like a great place to sit and relax!

In 1982 when Fantasyland was closed, the pirate ship and skull rock were torn down. As a result, Disney took some of the items from the ship, for example, lanterns, and rigging, and placed them inside Peter Pan’s Flight. Since the ship and rock couldn’t stay, it is nice that they are using some of the pieces elsewhere to keep Disney’s history there in the park.

Another change happened in the London and Neverland scenes. With the addition of new special effects.

Finally on the list of Secrets of Peter Pan’s Flight in Disneyland are the word blocks that are in Wendy, John, and Michael’s bedroom. You have to look quick or it can be missed, but on the floor are letter blocks and they spell out Disney. Sometimes it uses some numbers in place of the letters, sometimes it is all one level, or other times it has Dis on top of the ney. It is fun to check it out during your trip. It could be different from the day before!

Peter Pan’s Flight in Disneyland has been around since the park first opened in 1955. This attraction is still very popular to this day. Being that it has been around for so long, there have been changes over the years. I hope that today’s post helped you to get to know more about this beloved attraction.

Do you have any questions or comments on today’s post-Secrets of Peter Pan’s Flight in Disneyland? Please feel free to leave them in the comments below. I would love to help!