Attractions at the Disneyland Resort have come and gone through the years. Therefore today I would like to share the 12 Opening Day Attractions that Still Exist Today in Disneyland.

July 17, 1955, is the day that Disneyland opened. After many years of dreaming, planning, and building the day finally came when Walt Disney saw his dream realized. It was no easy feat to get there and opening day saw its share of mishaps.

Six thousand invites were sent, but, twenty-eight thousand people showed up. Most of them had counterfeit tickets. There were long lines for everything (like today’s busy days) and the restaurants ran out of supplies.

Even with all the problems on the day Disneyland opened, the park has survived and so have some of the attractions.

Today Disneyland has eight lands, (soon to be 9 when Star Wars Galaxy Edge opens). When Disneyland opened it had only 5 lands. Main Street, USA, Adventureland, Frontierland, Fantasyland, and Tomorrowland. 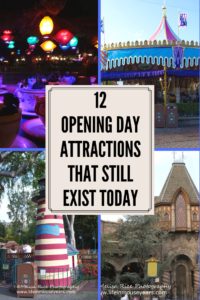 Here is a list of each land with the attractions that are still here to this day.

The second attraction on Main Street, USA is the Horse Drawn Street Cars. This is another favorite that has survived. It is fun to glide along the rails on Main Street while being pulled by a horse. The horses work four hours a day, four days a week. They usually retire after two years.

Discover All the Modes of Transportation on Main Street, U.S.A. here.

The last Main Street attraction is Main St. Cinema. This attraction has six screens and it plays various black and white Mickey Mouse cartoons. Including the first cartoon to have synchronized sound, Steamboat Willie, (First debuted in 1928).

Now for Adventureland. In this land, there was only one attraction here on opening day. It is called Jungle Cruise. Here you take a river cruise through the jungle. Your guide takes you on a dangerous and humorous tour down the river. Seeing lions, tigers, and elephants. Keep an eye out for the headhunters. You want to stay one step a” head” of them. Don’t worry though, many of the tourists that have taken this trip have made it back to civilization.

Frontierland is the third land to talk about. This land has had many attractions come and go throughout the years. But, the one attraction that has lasted for over 60 years is the Mark Twain Steamboat. This Sternwheeler still circles the Rivers of America. It is the most photographed stern-wheeler in America. When they were building the Mark Twain Steamboat, the sponsored funds ran out. Walt Disney was so determined to see it running that he paid for the rest of it himself.

Now let’s travel to Fantasyland. This land has had the most attractions to survive over the years.

King Arthur’s Carousel is the first attraction to mention. This attraction is themed after the movie Sleeping Beauty. There are 72 horses on this carousel. (They have 85 horses for the attraction) Most of the horses were hand-carved in Germany. They are maintained and painted every year. This way they stay looking brand new. They are a sight to see to this day.

Peter Pan’s Flight took its first flight on opening day in 1955. This attraction is still soaring to this day. You take a mini pirate ship over London and Neverland. As you are flying through, you hear and see the story of Peter Pan. This attraction uses more than 175 miles of fiber optics. It is amazing!

Mad Tea Party is a spinning ride based on the movie Alice in Wonderland. This attraction has giant teacups that you sit in and spin with the wheel that is in the center. Be careful if you have motion sickness. This attraction is very pretty at night. It is lit up with paper lanterns that are strung above the teacups.

Mr. Toad’s Wild Ride takes you on a wild cross-country journey. Mr. Toad is a crazy driver! Hold on tight during this wild adventure that starts out in Toad Hall. This attraction was originally going to be a roller coaster. But, Walt Disney wanted all the attractions to be for families. So it was changed to be a motorcar dark ride instead. The last attraction in Fantasyland is Snow White’s Adventures. This attraction was renamed Snow White’s Scary Adventures (and now it is Snow White’s Enchanted Wish). This was due to the guests being scared while they were on the ride and complaining they didn’t know. Disney decided to warn guests by adding scary to the name.

The final land and attraction is the Tomorrowland Autopia. Autopia is an attraction where kids get to go behind the wheel of a miniature car. Adults can drive these cars too. When this attraction first opened, the cars were destroyed after the first ten days. Everyone was playing bumper cars with them. After that, spring bumpers were installed on each car. Through the years, a metal track was installed down the center of the road to keep the cars from straying too far. Now, it is not just a paved road you drive on. There is an offroading section along the track. It is fun to take control of one of these cars.

I hope that you will have a chance to check some of these attractions on your next visit.

If you have any questions or comments, please feel free to drop them below!