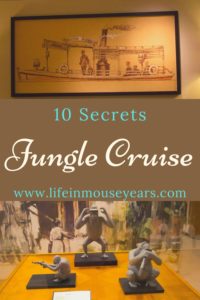 What is Jungle Cruise?

First up, for Secrets of Disneyland’s Jungle Cruise is to explain what the Jungle Cruise is. The Jungle Cruise is a motorboat cruise ride in Adventureland. A Skipper takes you on a guided pun-filled tour through four different areas. The Mekong River, The African Congo, The Nile River, and The Amazon in South America. Along the way, you see crocodiles, elephants, hippos, lions, and more during your comical excursion.

The Jungle Cruise is Based on Documentary Films and a Movie

Second on the list of Secrets of Disneyland’s Jungle Cruise is that when Disneyland opened in 1955, the Jungle Cruise was originally themed after the film series called “True Life Adventure” that Walt Disney produced. Most specifically the one that is about lions titled, The African Lion. In addition to the documentary film being an inspiration, the ride’s boats were themed after the 1951 movie The African Queen. The African Queen stared Humphrey Bogart and Audrey Hepburn, which had steamer boats, from this novel-based film.

Next for Secrets of Disneyland’s Jungle Cruise is that REAL animals were considered by Walt Disney before he decided to use Audioanimationic Animals. Live animals would be exciting and fun to see. Especially back in 1955, however, Walt Disney realized that the animals would most likely be sleeping during the day. As a result, Walt decided to use the Audioanimationic animals for the attraction.

Creative Imagineer Creates a Jungle On A Budget

Another on the list of Secrets of Disneyland’s Jungle Cruise is that the jungle was made on a tight budget. The funds for Disneyland were running low. Therefore, the Imagineer that was tasked with Landscaping, Bill Evans, had to be very creative when designing the jungle plant life. While some plants were imported, the creative part of the landscaping came when Bill Evans took orange trees and replanted them upside down. He then added vines to the roots to make it look exotic.

Bill did such a wonderful job on the design and development over the years that the Jungle Cruise is considered a “real” and self-sustaining ecosystem.

There Are Twelve Boats and They All Have Names

The Boat Designs Changed Over the Years

In 1994 the boats were all changed to look weathered and worn. As well as cargo colored canopy’s to match the theming of Indiana Jones. The attraction for Indiana Jones was being added next door (and took over part of the Jungle Cruise). As a result, the Disney Imagineers wanted to combine the look of the new theme being added to Adventureland.

Tour Changed From Educational to Comical

When The Jungle Cruise opened in 1955, the tour guides spiel was more of an educational tone. Teaching about the Jungle and the animals. Later in 1962, The Jungle Cruise was changed to have more comedy happening. Not only with the Tour Guides puns, but also with the addition of four new scenes that were funny.

Disney Imagineer, Marc Davis, who worked on Pirates of the Caribbean and The Haunted Mansion, added two of the new scenes in The Jungle Cruise. The Elephant Bathing Pool and the Rhinoceros Chasing Explorers Up the Pole. I have thoroughly enjoyed these scenes over the years.

Length of the Track Was Shortened

Another on the list of Secrets of Disneyland Jungle Cruise is that the track was shortened from what it was when it first opened. In 1955 when Disneyland opened, The Jungle Cruise Track was 1,920 feet long. When Indiana Jones Temple of the Forbidden Eye attraction was being added to Adventureland in 1994, the track for the Jungle Cruise was altered by shortening it as well as rerouting part of it.

Details About the Water in the Jungle

Next up for Secrets of Disneyland’s Jungle Cruise is about the water. Disney controls the color of the water in the Disney Parks. Originally the water was dyed a brown color. After a few years, it was then changed to a green color. Fairly recently, Disney has changed the color again to a blue-green color. Although I had noticed during my last trip it was looking a bit brown.

You may be wondering why does Disney dye the water? Well, that is so they can hide the rides track system that is in the water, in addition to other mechanical parts that are in the river. This helps to keep with the Disney magic that creates the illusion that you are on a real boat tour! I have to admit, I tend to forget that the attraction runs on a track.

Thank you for supporting Life in Mouse Years! Shop Disney is a great way to support us. Check out the store in the link below! The water in the Jungle Cruise is connected to other waterways in Disneyland. This is a really fun fact. The water in Frontierland for Rivers of America connects to the moat around Sleeping Beauty Castle. Next, it continues to the water at the entrance of Frontierland and it goes under the entrance to Adventureland. It then flows next to the Tiki Room and then flows into The Jungle Cruise. Which then goes into the Rivers of America. The circle of water life. hehe

For example, when you ride at night, your Guide has to shine a spotlight on things so that you can see what is out there in the jungle. Another example is that they can do completely different jokes that will only work at night. Like our guide did during our last trip. He went on and on after we saw the huge African Bull Elephant that it was so rare and he guaranteed that it was the ONLY one we would ever see. Then he shined the light over to another African Bull Elephant. After a few seconds, he turned the light off and said “that was a giraffe.”  I love it!

If you can go on The Jungle Cruise closer to closing time, that is one of the BEST times to ride. The Cast Members really get into it and they seem to be a lot more fun/funny. I recommend it if you are able to do that. It is so much fun!

The Jungle Cruise is one of the twelve opening day attractions at Disneyland. Thereby withstanding the test of time and is still going strong today! There are so many fun secrets of this attraction. I hope that I was able to share something that you didn’t know about before in this post 10 Secrets of Disneyland’s Jungle Cruise.

Did you enjoy this post? You may also enjoy my 10 Secrets of It’s a Small World post!

Curious what is new at Shop Disney? Check out the latest toys and other items in the link below!

Do you have any questions or comments on today’s post? Please feel free to leave them in the comments below. I would love to help!

If you would like to know what the current status of Disneyland is, you can find it at Disneyland’s official website here.

Lots of deals on California hotels, theme park tickets, and more in the link below! Disney’s Animal Kingdom in Florida is a great place to stay! Disney World is opening. Check out what deals you can get while waiting for Disneyland to open.