Have you discovered Davy Crockett’s Explorer Canoes? At Disneyland, you can ride (and paddle) an actual canoe around the Rivers of America! If you haven’t had a chance to do this, it is an experience you will want to try! 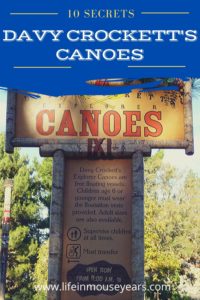 First, on the list of 10 Secrets of Davy Crockett’s Explorer Canoes, is what are they? Davy Crockett’s Explorer Canoes are free-floating canoes. What this means is that they are trackless. Where you paddle, (with the help of guides), is where you go! Unlike all the other attractions at the Disneyland Resort where the ride vehicles all go along some form of track. For example, Mark Twain Riverboat, Autopia, and Radiator Springs Racers.

Size of the Canoes

Second, on the list of secrets of Davy Crockett’s Explorer Canoes is the size of the Canoes. Each one of the fiberglass canoes is 35 feet long and can hold up to 20 passengers. Two guests per row. In addition to two guides, one at the front and the other in the back. They definitely are not little canoes.

Where Do You Go?

Third, is where do you go when you are on the canoes? To start, to get onto the canoes, head towards Hungry Bear Restaurant in Critter Country. (Just past Splash Mountain.) On the right, you will see a sign for the canoes. Here is where you go downstairs to get to the dock. (Unfortunately, I believe this is the only way to get there.)

Once you are on the canoes, you paddle your way on the Rivers of America. Going all the way around Tom Sawyer’s Island, 2400 feet until you make it back to the loading and unloading canoe dock.

Get ready for summer with ShopDisney’s Beach Towels! Click the link for all the fun designs. It is a Workout!

Number four on the list of secrets of Davy Crockett’s Explorer Canoes is that it is a workout! At least for your arms. This all depends on how much you put into it. The way the boats are designed, it is easy for the guests to row. Well, the two guides don’t hurt too. Because the guides do most of the work, anyone can go on the canoes and enjoy it. But if you can help, the guides will appreciate it.

Next on the list of secrets of Davy Crockett’s Explorer Canoes is that it has been in three different lands without moving. You are probably wondering how can that be???

Originally the canoes were considered to be part of Frontierland as part of the Indian Village expansion. Once Disneyland closed the Indian Village and changed the land to Bear Country, the canoes were then in that land. Then finally, when Bear Country’s name was changed to Critter Country, (when Splash Mountain was added in July of 1989). Therefore, it was then considered to be in Critter Country.

The fifth secret is the history of the attraction. Although I have shared a little bit of history already, there is more.

When the canoes first opened on July 4, 1956, it was called Indian War Canoes and had real Indian guides on each canoe. Later in 1971, when the Indian Village was closed, Disneyland reopened the canoes and called it Davy Crockett’s Explorer Canoe’s. It was inspired by the Davy Crockett mini-series that Disney produced. All the guides wore coonskin caps. However, the guides no longer wear coonskin caps.

Another secret on the list of secrets of Davy Crockett’s Explorer Canoes is that it has closed a few times through the years. The first time this attraction closed was in 1971 when the Indian Village closed. Although it was closed that year, it reopened later that year with the name change. In 1972 it became part of Bear Country.

Another time it was closed was in October of 1998. It was closed suddenly and rumors were going around that it was a permanent closure. However, in July of 1999, the canoes reopened again but seasonally.

Next on the list of secrets is that this attraction has been in five of the Disney Parks. Disneyland, Magic Kindom in Disney World, Tokyo Disneyland, Disneyland Park in Paris, and Shanghai Disneyland.

Some of the parks have closed their canoe attractions. The Magic Kingdom in Disney World closed in 1994. Disneyland Park in Paris closed theirs in 1994 as well.

Finally on the list of secrets of Davy Crockett’s Explorer Canoes are the times that it is opened. Right now the canoes are open seasonally. (Summer and Holiday Season). The canoes may also close due to weather. Also, the canoes will close at dusk or earlier, depending on if Fantasmic is running. Check Disneyland’s official website here for current information.

Disneyland has life jackets for the kids, and for any adult who doesn’t know how to swim. Don’t be afraid to ask for one if you need it. Better to be safe than sorry.

Another tip, if you have never rowed a canoe before, do not worry! When you take off, the guides will teach you what you need to know!

Davy Crockett’s Explorer Canoes are a fun way to cruise around the Rivers of America. It is a whole different experience being in the canoe as well as completely different views of the river compared to being on the Mark Twain Riverboat. If you have never been on the canoes, I highly recommend it on your next trip to the Disneyland Resort!

For the most up-to-date information on the Disneyland Resort, check out the official website here.

Undercover Tourist is a great way to book your Disneyland vacation. From hotels, to discounted theme park tickets. Not just for Disneyland, but also Universal Studios, Sea World and more! Check out the link for more information!